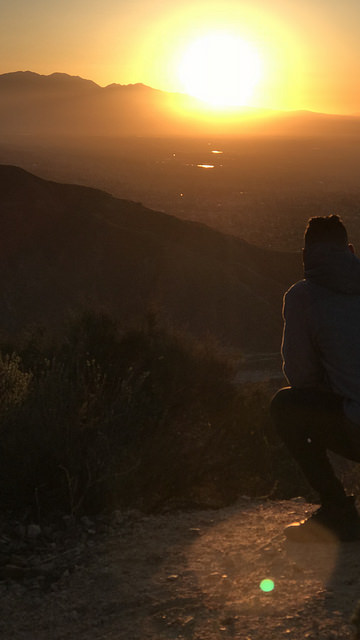 You Can’t Even Imagine

I can remember it like it was yesterday. I was 19 years old and traveling across the country with a Christian musical drama team. We had just spent a week ministering at a small Baptist church in Cedar City, Utah and had a couple of down days before our next stop, so we decided to go to the North Rim of the Grand Canyon.

It was about a 4 1/2 drive, and I remember all the way there just trying to imagine what I will be experiencing. Of course, I had seen pictures of it, as well as scenes on TV shows and movies, but two-dimensional pictures can’t do it justice. The entire trip, I couldn’t stop thinking about it and talking about it to my friends. Some of them had been there before and did their best to describe it, but even that didn’t prepare us for what we were about to see.

As we stepped down off that last step of that 1969 GMC coach we were traveling in, I remember being awestruck. I walked across the parking lot and right up to the edge of the canyon. I had been working on overcoming a fear of heights that year but didn’t even think about how high we were up. The view was breathtaking; it was so much more than I had expected. I stood there for what seemed like hours just soaking in the majesty of this creation that God had made just for us to see.

This is the way it is with God. If you read last weeks blog, you will remember we were talking about speaking wisdom. Paul goes on in 1 Corinthians 2:7-9 to say, “7 No, the wisdom we speak of is the mystery of God—his plan that was previously hidden, even though he made it for our ultimate glory before the world began. 8 But the rulers of this world have not understood it; if they had, they would not have crucified our glorious Lord. 9 That is what the Scriptures mean when they say, ‘No eye has seen, no ear has heard, and no mind has imagined what God has prepared for those who love him.’”

So, the wisdom Paul was speaking of in verse 6 is the mystery of God. This plan, the mystery of God, was made for our ultimate glory, way back before the world began, but He kept it hidden until the time was right. That’s the thing with God; He knows the end from the beginning. Isaiah 46:9-11 says, 9 “Remember the former things long past, For I am God, and there is no other; I am God, and there is no one like Me, 10 Declaring the end from the beginning, And from ancient times things which have not been done, Saying, ‘My purpose will be established, And I will accomplish all My good pleasure’; 11 Calling a bird of prey from the east, The man of My purpose from a far country. Truly I have spoken; truly I will bring it to pass. I have planned it, surely I will do it.” Before God created the world, before it was even without form and void, He knew that man would sin, that Jesus would have to come to earth to be our savior and that I would be sitting in my office tonight writing this blog. The best way I’ve heard it described, in human understanding anyway, was to think of time as a line, and God is outside that line. He sees the beginning of the line, the end of the line, and everything in between, all at the same time. He sees the end from the beginning.

Paul goes on to say that if the rulers of this world, the wise, the elite, could have understood the wisdom of God, they would have never crucified Christ. You see, that’s our problem as humans. We think we are so smart; we think we know everything and no one, not even God, can tell us anything.

He then says that all this is what is meant in scripture when it says, “No eye has seen, no ear has heard, and no mind has imagined what God has prepared for those who love him.” This came from the prophet Isaiah when he said, “3 When you came down long ago, you did awesome deeds beyond our highest expectations. And oh, how the mountains quaked! 4 For since the world began, no ear has heard and no eye has seen a God like you, who works for those who wait for him! 5 You welcome those who gladly do good, who follow godly ways.” Isaiah 64:3-5.

There’s a great song that I’m sure most of us know very well. It’s a song by the group MercyMe called, I Can Only Imagine, and the lyrics say:

I love this song, but the truth is, as this verse says, we can’t even imagine what it will be like. There have been several people lately who say they got to go to heaven. They have written books about it and talked about it, and while I don’t think they are lying and I’m sure they truly believe that is what happened, I have one problem with it. Every one of them that I have heard or read keep talking about the beauty of heaven, the streets of gold, and the pearly gates, but let’s take a minute to look at the word of someone we know actually got to see heaven.

Let’s look at the book of Revelation, Chapter 1 and starting at verse 12. John said, “12 When I turned to see who was speaking to me, I saw seven gold lampstands.13 And standing in the middle of the lampstands was someone like the Son of Man. He was wearing a long robe with a gold sash across his chest. 14 His head and his hair were white like wool, as white as snow. And his eyes were like flames of fire. 15 His feet were like polished bronze refined in a furnace, and his voice thundered like mighty ocean waves. 16 He held seven stars in his right hand, and a sharp two-edged sword came from his mouth. And his face was like the sun in all its brilliance. 17 When I saw him, I fell at his feet as if I were dead. But he laid his right hand on me and said, ‘Don’t be afraid! I am the First and the Last. 18 I am the living one. I died, but look—I am alive forever and ever! And I hold the keys of death and the grave.’” Do you see what I’m getting at? John didn’t talk about the beauty and majesty of heaven; he only talked about the beauty and majesty of Jesus. In fact, throughout scripture, anyone who got to ascent to heaven only talked about the beauty and majesty of Jesus.

One last thing, there is a qualifier. He said that we couldn’t even imagine what God has prepared for who? For those who love Him. So, we need to ask ourselves how much we love God. Do we love Him as much as He loved us? If we’re being honest, most of us, and I include myself in this, will have to say we don’t. This is for what we must strive. We must remind ourselves daily how much He did for us. We must love Him above all else.