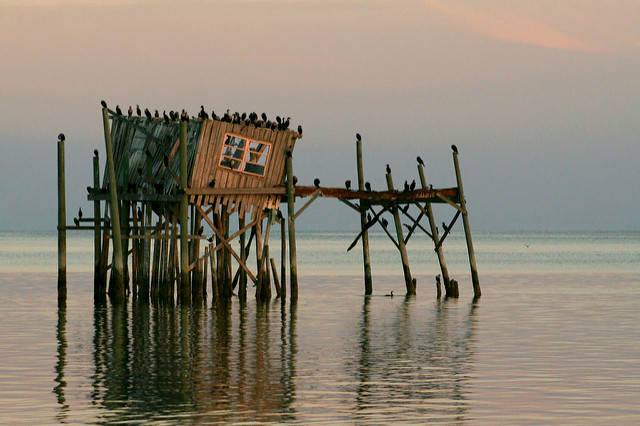 The picture above is the Honeymoon Cottage in Cedar Key Florida. This structure was built as a guest house in 1959 by the Thomas family of Gainesville. The Thomas’ had a vacation home on Cedar Key and in 1959 decided to build this guest house. When they originally built it, it looked much better than this, and many people stayed in it over the years, including a famous author. After a local couple used it as their honeymoon suite in the 1970’s, it was given the name, The Honeymoon Cottage.

The problem with this guest house is that it was not built to survive the elements of the Cedar Key area. You see, Cedar Key is not part of the “Florida Keys,” it is off the Gulf Coast, just below the Panhandle of Florida. This area gets some terrible hurricanes that will stall in the area and stay right over Cedar Key for what seems like an eternity, and that’s exactly what happened in 1985. Hurricane Elena came up the Gulf of Mexico and, as usual, built intensity over the warm waters of the Gulf. By the time it got to Cedar Key it was a category 4 hurricane and it stalled over Cedar Key. There wasn’t much left of the Honeymoon Cottage after that and by that time State regulations had changed that banned the building of structures over the water, so they were not allowed to restore it. But, because of its name and the condition it was in, the Honeymoon Cottage became one of the most photographed structures in the state of Florida, you’ll even see it on postcards sold in other countries, like Germany.

Ask any builder and they will tell you that the most important thing to think of when building any structure is the foundation. And, yes, they did sink the polls deep enough for the Honeymoon Cottage, but there is much more to think about in the building of a foundation.

This is what Paul was talking about in 1 Corinthians 3:10-11 when he said, “10 According to the grace of God which was given to me, like a wise master builder I laid a foundation, and another is building on it. But each man must be careful how he builds on it. 11 For no man can lay a foundation other than the one which is laid, which is Jesus Christ.” When Paul planted the church at Corinth, he did it like a wise builder by laying a good foundation, while taking all the elements into consideration. You see, Paul knew that he wasn’t going to do all the building of the church himself, so he wanted to make sure that when others came to build on it, they had a firm foundation to work on.

We see Paul building this foundation in Acts chapter 18. This passage says that Paul devoted himself to the scriptures and preached Christ to the Jews first, then when they rejected him and blasphemed, Paul went to the gentiles. Paul then went and started a home group at he home of a man named Titius Justus who lived next to the synagogue. Then, Crispus, the leader of the synagogue who believed in the Lord, joined them and it says, “and many of the Corinthians when they heard were believing and being baptized.” Acts 18:8.

Apparently Paul was worried about the Jews coming after him, because it says in verses 9-10, “9 And the Lord said to Paul in the night by a vision, ‘Do not be afraid any longer, but go on speaking and do not be silent; 10 for I am with you, and no man will attack you in order to harm you, for I have many people in this city.’” So, God had to calm his fears and let him know that He’s got this. Then it says that Paul spent a year and a half there teaching the word of God among them. Here’s the thing, preaching is good as we read in 1 Corinthians 1:21, “God was well-pleased through the foolishness of the message preached to save those who believe.” But there is no foundation without sound teaching. 2 Timothy 3:16-17 tells us, “16 All Scripture is inspired by God and profitable for teaching, for reproof, for correction, for training in righteousness; 17 so that the man of God may be adequate, equipped for every good work.” In fact, the Bible tells us to preach the gospel to the unbelievers, and to teach believers. Look for yourself, the word preach is used 109 times in the New Testament, interestingly it is only used 8 times in the Old Testament, but every one of the 109 times it is used in the New Testament, it is talking about preaching the gospel to the unsaved, or the message you were preached when you believed.

Think about it, if every person sitting in a pew on Sunday was taught to be a preacher and was equipped and commissioned to go out and preach the gospel to all the world, how many more people would be coming to Christ?

This is what Paul did with the church at Corinth. He laid a solid foundation with good teaching. He taught them good biblical principals for them to build on. Yes, there were some problems that he had to correct later, they were humans and messed up here and there, but because of the foundation he laid with good Bible teaching, he was able to make the corrections and move on with doing the work of the Lord.